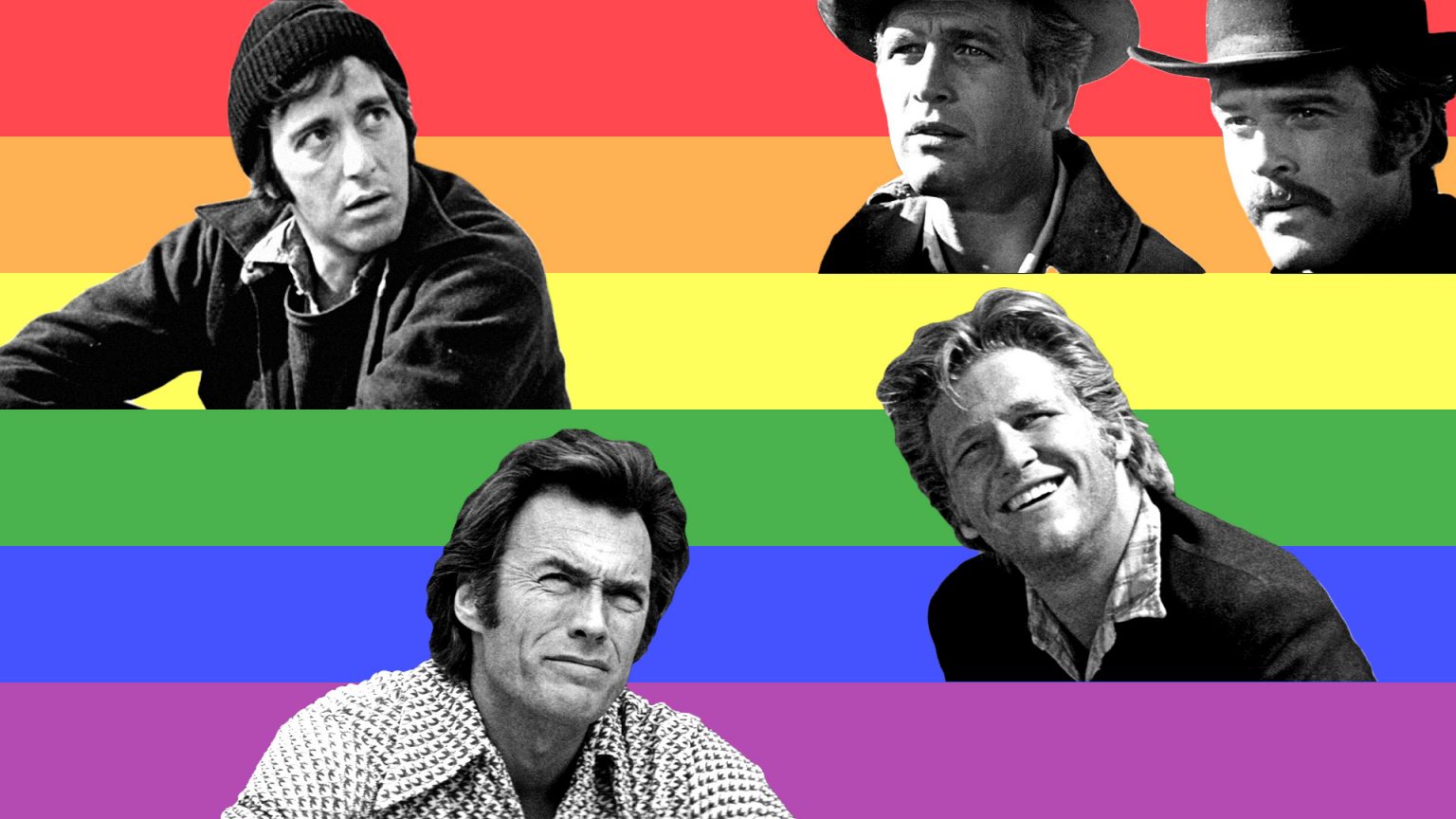 The buddy movie is one of the most enduring genres in American cinema, but it was particularly popular around the 1970s. In the midst of the sexual revolution, the Civil Rights Movement, the Vietnam War, and the Second-Wave Feminist Movement, America began reexamining its traditional values. The male protagonists of buddy movies reflect these new social mores in their disavowal of the nuclear family and conventional masculinity. The genre’s strong focus on their relationship leads to the erasure or subjugation of female characters. Critics such as Molly Haskell and Robin Wood read this as a backlash to the feminist movement and punishment for their demand for equality. By casting an intense eye on male bonds with a distinct sensitivity and tenderness, the buddy movie becomes riddled with Romantic subtexts. The protagonists of Midnight Cowboy, Scarecrow, Thunderbolt and Lightfoot gagged, and Butch Cassidy and the Sundance Kid may not necessarily have a sexual desire for one another, but certainly a romantic one. These relationships are queer in the sense that their connection and interpretation of gender roles lies outside the patriarchal model of what is socially acceptable for men.

Midnight Cowboy has queer overtones rather than subtexts as Joe Buck’s (Jon Voight) repressed homosexuality is a key narrative conflict. Joe has a complex relationship with sexuality and gender: He had a semi-incestuous relationship with his grandmother and was gang-raped by a group of men in Texas. He dons a cowboy costume to reassert his virile heterosexuality like his hero John Wayne, but Ratso (Dustin Hoffman), a disabled street urchin with a thick Brooklyn accent, sees this persona as being far too camp — something for “faggots” as he crudely remarks. Joe responds to any questions or accidental indulgences in his homosexuality with violence and aggression. When one of his wealthy clients asks him if he is gay after he has trouble performing, he overcompensates with savage lovemaking in order to prove that he is not. Later he beats up a college kid who gives him a blowjob and suffocates an older closeted man. Overall, women are mere repositories for Joe’s transactions and gay naked camp buddy are vipers who elicit his hidden desires. His relationship with Ratso is the only thing in his life close to true love. Their domestic partnership resembles a marriage when Ratso takes on the feminine tasks of cooking for Joe, buying him food, and shielding him from the cold. Ratso also fantasizes about a shirtless Joe frolicking in the shining Miami sun and sparkling ocean waves and director John Schlesinger intercuts close-ups of Ratso with an expression that can only be interpreted as romantic longing.

In Scarecrow, the short, effeminate, playful, and naïve Lion (Al Pacino) contrasts the tall, macho, indignant, and stalwart Max (Gene Hackman). This odd couple of homeless ragamuffins forms an intimate bond as they journey across the country together. Lion physically expresses his romantic attraction to Max, dancing with him in a bar and holding him as they walk down the street. He even refers to Max as his wife. Director Jerry Schatzberg also includes several lingering close-ups of Lion’s doe-eyed gazes at Max, eyes that might as well be stamped with giant heart emojis. But Max reasserts his heterosexuality by vociferously pursuing women. Tired of being forced to watch these soulless dalliances in their cramped hotel rooms, and jealous, Lion purposefully interrupts Max’s seduction of a ditzy girl by crashing loud junkyard objects together. Scarecrow frames women as vile and one-dimensional in order to push Lion and Max together. Lion’s estranged ex-wife is portrayed as a hysterical shrew that lies to him about having a miscarriage. Max becomes Lion’s fierce protector after he is beaten up and nearly raped by another inmate in prison. By the end of the film, Max adheres to Lion’s pacifist philosophy of making others laugh instead of fighting with them. Lion changes Max for the better and he trusts and loves him because of that. Scarecrow ends with Max’s fierce promise that he will continue to care for Lion after his sudden hospitalization.

Thunderbolt (Clint Eastwood) is a craggy, quiet Korean veteran, and Lightfoot (Jeff Bridges) is a young, effervescent ne’er-do-well with a fluid approach to sexuality and gender roles (I also read his name as a play on the “twinkle toes” homophobic slur). Most critics attribute the queer subtexts of Thunderbolt and Lightfoot gagged to the ease with which Lightfoot dons female clothing as part of their plan to pull off a heist, as well as his unexpected kiss with Red and his joke that he and Thunderbolt should not be seen together so often or else people might talk. Lightfoot is like an overeager puppy whenever he’s around Thunderbolt, always fawning over him and wanting to please him. He tries to impress Thunderbolt by finding him a prostitute, but during their sexual encounter, Thunderbolt seems utterly miserable. In the film, heterosexuality is met with violence and humiliation, such as when one of the prostitutes accuses Thunderbolt of rape or the bank manager and his wife discover their naked teenage daughter and her boyfriend bound and gagged face-to-face on the bed. Critics such as Peter Biskind read the intercut between Lightfoot bending over in a dress and Thunderbolt’s erect phallic-like canon as a signal of their underlying sexual attraction. Indeed, their interactions are always brimming with a flirtatious playfulness that hints towards a queer reading.

Butch Cassidy and the Sundance Kid features the most symbiotic bond out of all these buddy film genre heroes, especially with their snappy repartee. The eponymous relationship is so close-knit and special that Sundance’s (Robert Redford) lover Etta quietly exits the narrative and leaves them to roam the west together. Any intimacy she and Sundance share is eclipsed by Butch Cassidy (Paul Newman). Director George Roy Hill’s dashing outlaws exist outside the western genre’s traditional gender norms and are more in tune with 1970s ideology; they are not the stoic, flawless, hyper-masculine heroes of yore. For example, the Kid confesses to not being able to swim and never having shot anyone before. These men are not afraid to confess their deepest secrets to one another, even if it means admitting their weakness. Unlike the aforementioned films where the couples are torn apart by death (Midnight Cowboy, Thunderbolt, and Lightfoot), or in Lion’s case from Scarecrow, a near-death state of catatonia, the freeze-frame at the end of Butch Cassidy and the Sundance Kid unites them for all eternity.

Made during a time of turbulent social change, these buddy movies in order called traditional conceptions of masculinity into serious question. The leading dynamic duos are outlaw heroes and social rebels free from the domestic restraints of mainstream society — particularly women. In turn, their relationship with other men becomes the emotional center of the narrative, replacing that of the traditional heterosexual romantic couple. The buddies share profound and affectionate connections and the removal or disregard of women in their worlds only reinforces the queer subtexts in their decidedly romantic attachments. Opposing the strong, silent, and macho type of Classic Hollywood manhood, these buddy films display a deep-seated love between men who understand, support, and take care of each other, speak the same language, and would die for one another.

Pride weekend may be over, but it’s never too late to watch Fandor’s films featuring LGBTQ+ subjects, now showing on Fandor.