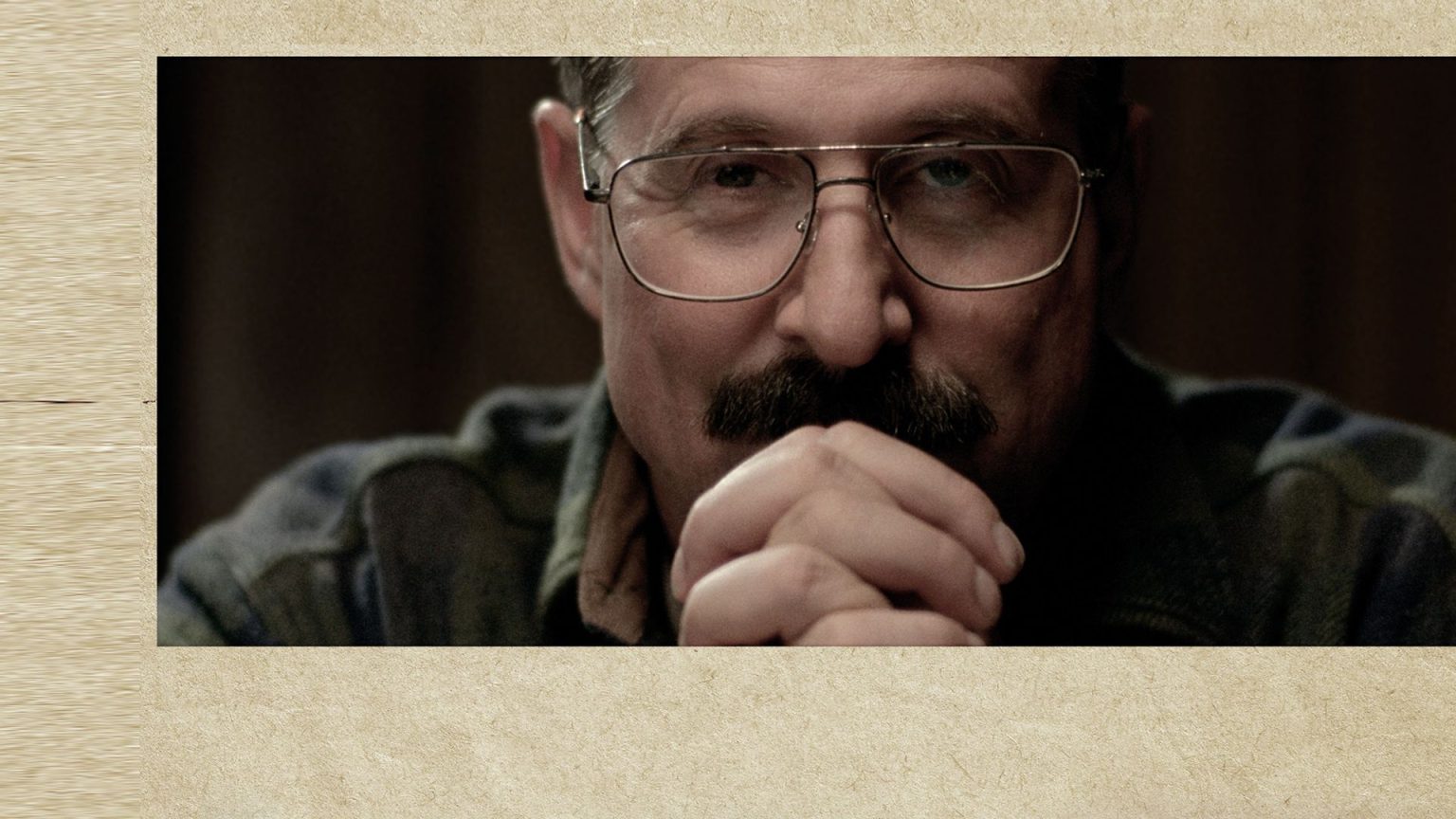 There’s something about Walter the police chief that isn’t right. As played by Peter Stormare in Small Town Murder Songs, he’s a bit of a geezer. When we see him in his street clothes he looks like an older man who should be sitting on his front porch, waving to the neighbor kids, maybe peeling an apple. But in his police uniform he swaggers like a Nazi storm trooper ready to stomp someone’s head. There’s violence in his past, and the whole town knows it.

The movies are loaded with conflicted cops. They’re a staple of film noir, and the better police dramas of the ’60s and ’70s. The citizens of this small Ontario town refer to Walter by name, which shows that he’s lost some of their respect. In an early scene, a prefab house is being hauled away. Walter drives slowly behind it, nodding at people on the sidewalk, as if he’s in a parade. In another early scene we see him baptized in a lake during a Mennonite service. When he comes out of the water, he giggles maniacally. There’s something wrong with the guy.

Small Town Murder Songs shows all of its characters in sharp, detailed poses; they seem the way people do in real life – clumsy, loud, a trifle ugly and knotty. Stormare, who first gained notice many years ago in Fargo for putting Steve Buscemi in a wood chipper, plays Walter as a man boiling from within.

Walter is different from most movie cops. He’s good at his job, for one thing. He can approach a snarling dog and soothe it. He can walk comfortably into a local strip club to ask questions. He’s flawed, with a temper so hot that he’s alienated his own relatives, but he’s the cop you’d want on your side.

The small town, and Walter’s life, is jolted when the body of a young woman is found in some brush near a lake. It’s the same lake where Walter was baptized; when an investigator asks if he’s familiar with the lake, Walter says, “I was practically born in it.” It’s the first murder the town has ever hosted, so to speak, and Walter has to work with some special agents to solve it. There’s reason to believe the killer was a local creep named Steve. As played by Eric McIntyre, Steve is dirty and rude and is usually seen getting drunk at a karaoke bar on the outskirts of town; it’s not a stretch to think of him as the murderer.

There’s a tangle, though. Walter’s ex girlfriend Rita is now with Steve. Why she went from the violent police chief to this Charles Manson-looking geek doesn’t say much for her, though it’s a small rural town and men are scarce. As more suspicion surrounds Steve, Rita covers for him. Meanwhile, Walter knows something is askew. He’d like to take Steve into the woods and beat a confession out of him, but he can’t. He’s trying to leave his head-busting ways behind him.

Walter grits his teeth and finds some solace in his new girlfriend (Martha Plimpton), a down to earth waitress named Sam. We’re glad Walter has Sam for company, but we’re not sure that their quiet dinners together will be enough to quell the inferno inside him.

Writer-director Ed Gass-Donnelly won a slew of awards on the festival circuit when this film was first shown in 2010. He deserved them. He followed it up with a forgettable horror movie – The Last Exorcist II – but he seemed inspired during Small Town Murder Songs. It has the existential ennui of early Terrence Malick. There’s no cuteness or glibness in this story about a man trying to redeem himself.

Consider a sequence where Walter is berated by one of his superiors after botching the investigation. We half expect Walter to lose his temper, or to tell the boss to go to hell. But that’s because we’ve seen too many Dirty Harry movies. Walter just sits there and takes it. That’s how it would be in real life.

There’s a great interest in detail here, from the lacquered green fingernails of the corpse, to the way the town’s old-timers speak to each other in Swiss or German. I especially liked a scene where Sam wants to call a woman a whore but spells the word rather than say it aloud; and she misspells it. Glass-Donnelly knew he wasn’t aiming for the shopping mall audience, so he could take his time and focus on small things. There’s a pounding music score that sounds like Tom Waits in his 1990s banging on the water pipes period, and loud chapter headings like “God Meets You Where You’re At,” but it’s the quiet scenes that stay with you.

Stormare carries the day as Walter. It’s a role that might’ve been played in the past by Robert Duvall or Gene Hackman, and Stormare nails it. Long after I’ve forgotten what this movie was about, I’ll remember Stormare’s performance.

Small Town Murder Songs is a lesson in how a complex character can elevate a so-so story into something memorable, especially when played by a quality actor.