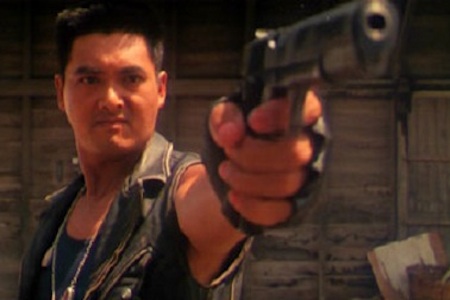 Bullet ballet maestro John Woo was lured to Hollywood in 1992, leaving his country on his ultimate Hong Kong bullet-fest spectacle, Hard Boiled. It’s fitting, perhaps, that Full Contact, still Ringo Lam‘s most celebrated film, came out the same year. Stripped down and savage where Woo is big, busy, and whirring with more flying bullets than a small war, you could call Full Contact the anti-John Woo Hong Kong gangster film. Where Woo prized loyalty under fire—even adversaries found themselves bonding via bullets—for Lam, violence is the catalyst for mistrust, betrayal and a poisoning of one’s character by hate and vengeance.

Full Contact is also Lam’s answer to the American crime movie, driven by the hyperactive energy that powered the entire Hong Kong industry and populated by crazed, unstable personalities extreme even by HK movie standards. It’s all about devoted friends colliding with treacherous partners, with betrayal, vengeance and collateral damage left in its wake. Three buddies join forces for a heist that leaves one dead, another maimed, and the third forced to betray his best friend or die. Loyalty under fire only destroys what family they have left, and reveals the weaknesses of the survivors.

Hong Kong movies of the era sometimes borrowed from American movies and Full Contact has more than a few echoes of John Boorman’s 1967 crime film, Point Blank. Chow Yun-fat plays Jeff (as he’s called in the English subtitles), the Lee Marvin role here, a former bar bouncer and papa bear of a small group of devoted buddies who agrees to join forces with a gang led by a flamboyant, sadistic, unabashedly gay crime lord named Judge (Simon Yam) for a heist that will pay off the debt of his best friend, Sam (Anthony Wong). Judge has other ideas, turning on Jeff and leaving him for dead along with an entire family that they gleefully execute out of nothing but pique. But Jeff comes back from the dead and returns for revenge like a phantom, wreaking havoc on those who betrayed or forgot him, losing his brotherly warmth in the cold forge of revenge. He turns himself into an agent of chaos and leaves his own collateral in his wake.

The film is prized by action fans and Hong Kong film junkies for the wild “bullet cam” sequences in the shoot-outs in the film’s final act. His camera (via the shaky magic of audacious and endearingly imperfect visual effects) rushes along behind the bullets fired between Jeff and Judge, making a private fight even more personal and visceral. But you can get a better idea of Lam’s talent and approach in the scene above, where Jeff (back from his recuperation and on the trail of revenge) and Sam heist a cache of stolen military munitions from an ice-house hideaway.

Chow Yun-fat did not come to the movies from martial arts training like many of the Hong Kong action stars. He was a light romantic lead before he became an action star, but he brings a steely focus and burning intensity to his action scenes, and a charming charisma to his characters. He’s Cary Grant with a gun and a temper.

Lam’s answer to the American crime movie is driven by the hyperactive energy that powered the entire Hong Kong industry and populated by crazed, unstable personalities extreme even by HK movie standards. It’s all about devoted friends colliding with treacherous partners, with betrayal, vengeance and collateral damage left in its wake.

This fight isn’t about flamboyant moves, it’s about quick, efficient, brutal effectiveness: incapacitate the enemy, get the information and move on. Lam isn’t one to show off, yet that clean, brutal efficiency makes the scene even more impressive as both action choreography and dramatic focus. Chow’s Jeff has a humorless control in direct contrast to Anthony Wong’s Sam, once a weak-willed little brother needing Jeff’s protection. By this time in the film he has more confidence but he lacks the control and the cool that makes Jeff so effective. Sam’s attention wanders and he’s forced to fire, the gunshot inviting even more henchman. As Sam collapses in panicked, wild shooting, Jeff measures the situation and responds with makeshift explosives (in reality not that effective but an action movie staple) and a unflinching accuracy.

Jeff isn’t a ghost, he’s flesh and blood (and we know because he leaves a lot blood behind before the film is over), but this is a film haunted by memory and regret and Jeff is often seen as a kind of phantom called forth by the guilty consciences of the crooks. He’s glimpsed through the ripples of a swimming pool, fractured in reflections in a nightclub mirror, and seen emerging or disappearing into smoke or fog. In this gunfight, the sprays of vapor shroud Jeff like some supernatural camouflage. He hides behind it, his gun appears through it as if from nowhere, and when the gunmen are defeated, he melts back into it like a vengeful spirit. He’s more than human, or perhaps more accurately, no longer fully human. Notice how he doesn’t even bother to signal Sam, he simply makes his exit and leaves Sam to catch his breath and catch up as best he can. Sam may fool himself into thinking they’ve become partners, a buddy team of bad-asses, but Jeff doesn’t treat Sam as a buddy, just a means to an end.