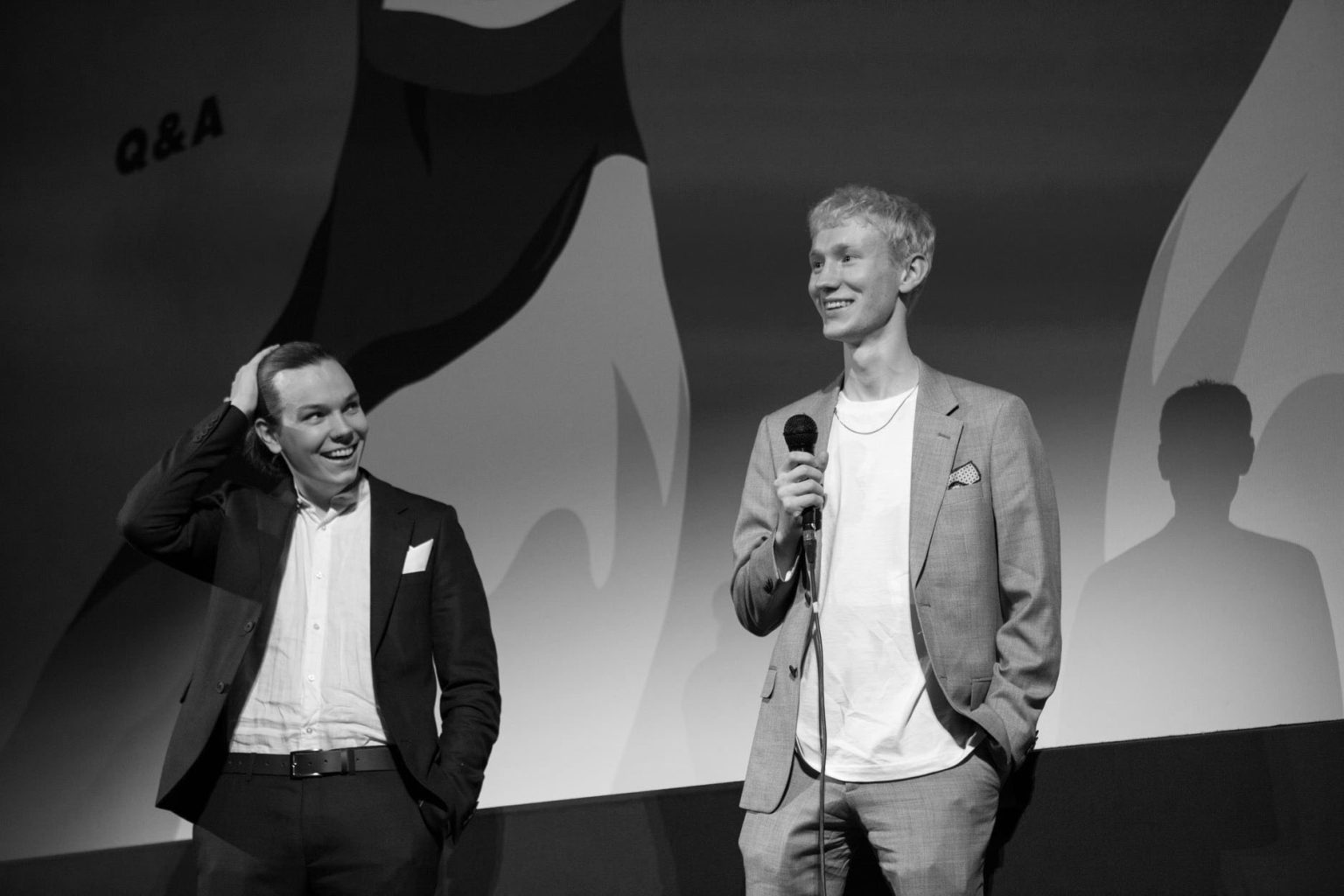 Ásgeir Sigurðsson and Anton Karl Kristensen, the co-directors behind “Come to Harm” started their filmmaking journey early in their lives. Born in 2000 (Ásgeir) and 1998 (Anton), they met when they were little through their parent’s friendship. One evening when they were bored at a dinner party, they looked to the laptop to kill their time with iMovie and after some experimentation they quickly found that filmmaking was what they were meant to do. After High School they went different paths. Anton moved to the U.S to study filmmaking at The New York Film Academy whilst Ásgeir went on to make a web series for the National Television in Iceland. While Anton was abroad, Ásgeir wrote “Come to Harm” and when Anton came back to Iceland the first thing on their minds was finding a way to produce it. Ásgeir looked to his old schoolmates who were more than happy to help work on the film. Even though the budget was low, the cast and crew’s passion for the project was immense and is the reason the outcome of the film is beyond what they thought could be.

First off, I wanted to personally thank both of you for taking the time out of your day to chat with us about your newly released thriller, Come to Harm.

Asgeir: Pleasure, thanks for having us.

Q: To kick things off, what would you say was your primary source of inspiration towards creating Come to Harm?

Asgeir: For me, I think the inspiration of the story came from our surroundings growing up. We grew up as best friends in very similar neighborhoods in Iceland. I knew I would be acting in the film from the beginning so seeing as I’m on the younger side, the idea went straight to a family story, a story of two brothers to be particular. In our hometown Reykjavík, there were a lot of kids that grew up in poverty and around substance abuse so we were fascinated by the hereditary aspect of it, and how or if that aspect can be reduced by a strong parent figure, which Oliver the main character takes on and tries to balance throughout the film while of course dealing with his own personal matters.

Anton: Yes, and for us it’s really always been about action, thrillers– when we were making videos and short films at a young age it was always guns and violence and I think it was kind of important to us here first and foremost tell a story of a family, a broken family that you could really relate to, even if you don’t relate to the circumstances – so when we get to the action, the violence, the impact could be so much more because you’ve seen what our characters are going through and you would not want to wish upon them any more burden.

Q: With this film being a first feature-length directorial debut for the both of you, how did you find yourself adapting to your responsibilities behind the camera?

Anton: It was very important for us to get this right, we had our own financial interests on the line and a lot of people were trusting in us and volunteering to help make this film because they believed in our passion, and our vision for the story. We made the film mostly with equipment that we own ourselves, and borrowing from good friends – and the film’s main apartment is my own. – The party scene is shot in Asgeir’s apartment. We really had to make it work like that because we did not have time/money to rent a lot of locations.

Asgeir: Yes, and it was tricky directing actors that are more known than yourself. You have to sell them on this idea that you are trying to make something great, and they really just have to trust you, and they did. For me it was also finding a balance between directing and acting because I star in the main role, so luckily for us we had a solid script, in which I could trust in the dialogue, my co-actors and the people behind the camera to give me directions. Anton is the director of photography so I completely trusted him with the framing and visual storytelling, it was comfortable not having to check every take and it also saved us a lot of time, which is so precious to us on a small scale- movie like this one.

Q: This film to me is a brilliant exploration of family dynamics with the repercussions of drug use, alongside a glimpse into the Icelandic criminal underworld, but I was wondering, what personal message do you hope viewers are left with after seeing Come to Harm?

Asgeir: It’s a story of moral dilemma, for me it was never supposed to be an Anti-drug PSA even though I think the movie does that on its own terms by just showing the aftermath of substance abuse, and the ripple effect it has on a family and the hereditary effect. There is a cause and effect for everything Oliver, the main character does in the movie and he does it all in order for his family to come out in the best possible situation but it’s really up to the audience to decide at the end of the story, that if everything would’ve just been left alone, would this family be better off? I honestly don’t know myself and I wrote the script, but that I think is also kind of beautiful.

The crime aspect of the film was very inspired by the Icelandic underworld, it’s getting scarier by each day. News of disappearances and drug related gang operations are not rare, and we put lots of research into making it as realistic as possible. As to what is not seen in the film should still show how much bigger things are going on outside of this family’s events, this is only one story.

Q: Now that the film has been released, are you both happy with the overall response to the work? Personally, I think it’s one of the best international thrillers that I’ve seen in quite some time!

Anton: Thank you, it’s always a good feeling to hear that people like or enjoy our film. It was a whole emotional roller-coaster trying to release it to the world. We had been working on post-production almost constantly for a year when we were starting to lose grip of the film’s real value. Working constantly with color, audio and editing gives you tunnel vision and there is really no way of knowing if the project you have been developing for about 2 years is something that anyone would enjoy, so it came as both relief and excitement when a wave of well-respected film festivals accepted our film and let us travel abroad to enjoy the film with an audience and receiving nominations and awards. That experience reminded us why we did it in the first place.

The first review we ever received of the film called it a “Masterpiece” and that one was quite the ego-booster for us and from there on we were picked up by the biggest theatre chain in Iceland, then we knew that we did not have to worry anymore if it was a good movie or not, we still don’t know, honestly, but this achievement took the devil of doubt out of us.

Asgeir: We learned a lot about the whole process, what it means to be a film-maker and releasing a film out to the world. We have had our fair share of bad criticism and also good criticism and that for us was a learning experience. Both for our next projects and getting to know the general audience. We knew from the beginning that we did not want to make any film that had been seen before. Of course it has a genre, and plot that people might know, but from one viewing you can see that it is our film, and we wouldn’t have it any other way. The talent on screen still surprises me to this day, and I think we made something special, even if some people say it isn’t. I think that’s the lesson we learned. It’s all about perspective, and perspective is not to be taken personally.

We recently got nominations for the Icelandic- Academy Awards for our small film. That recognition is priceless to us and almost unheard of for young/up and coming filmmakers as ourselves. So, in the end, make what you love. People are going to love it, people are going to hate it, but in the end—you are doing what you love, so you always come out on top.

Q: Can we expect any new projects from yourself in the future? Can’t wait to see what comes next from both of you!

Asgeir: Yes! This film has opened up a lot of opportunities for us so we are quite excited. We have a couple of projects in development, not going to say a lot but what I can say is. Detectives, Young pop-stars, and more awkward parties.

Q: To wrap things up, is there a way that fans of your work could reach out to you?

Asgeir: My Instagram “asgeirsigurds” it’s always a pleasure getting people’s thoughts on the film in my messages.

Anton: My Instagram is “antonkk98” and you can also reach us through IMDBpro, we’d love to hear from you.

On behalf of Fandor, thank you so much for taking the time out of your day to speak with us about Come to Harm! We’re very excited to see what the future has in store for the both of you.

Asgeir: It was lovely, thanks a lot.

Anton: Thanks for having us.

Come to Harm is now exclusively available for your viewing pleasure at: www.Fandor.com