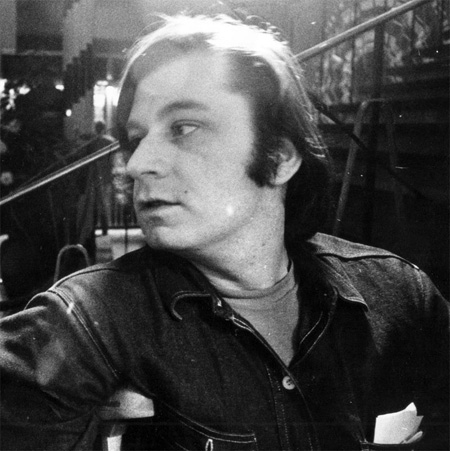 At new filmkritik, Johannes Beringer passes along the sad news that experimental filmmaker Stephen Dwoskin passed away in London early in the morning of June 28. He was 73.

“He discovered experimental cinema alongside Maya Deren and was influenced by the transgressive underground films of Jack Smith and Ron Rice,” writes François Albera at Dwoskin’s site. “He later published the book Film is… on this genre, in a highly personal and activist style, at a time when the police frequently carried out Prohibition-style raids on venues where experimental films were shown, confiscating and destroying prints, and arresting organizers, filmmakers and sometimes audience members.”

Reviewing a five-DVD set collecting Dwoskin’s works for Film Quarterly in 2007, Adrian Martin noted “the immense variety of modes and forms with which this director works—not only from film to film, but frequently within the same film. Outside In (1981), for instance, is nominally about the filmmaker’s experience of his disability, stricken with polio in early childhood. But is it a personal reminiscence, a documentary, an essay film, a fictional recreation, a lyrical abstraction, or a dance/performance piece? It works through—as is often the case in Dwoskin’s feature-length pieces—a series of self-contained tableaux, each one starkly set against those surrounding it, and each drawing upon a very different style of cinematic representation. Poetic associations flit from segment to segment, but it is left to the viewer to draw the lines and make the connections: the prosthetic apparatus into which Dwoskin laboriously straps his legs each morning is compared to both the everyday high heels with which women torture themselves, and the bondage-and-discipline gear that forms part of a sophisticated sexual ‘underworld; we see much of in his work.”

Update, 7/12: “The critic Raymond Durgnat, a friend of the filmmaker, once remarked that, as a New Yorker migrating to Britain, Dwoskin ‘eluded both cultures,'” recalls Adrian Martin in the Guardian. “Artistically, he was not a purist. He never devoted himself to a single track of aesthetic research or aligned himself with any collective movement. He remained outside the abstract school associated with Americans such as Stan Brakhage and the formalist school associated with British artists including Malcolm le Grice. Dwoskin happily mixed all available modes, often in surprising ways: documentary with fiction, abstraction with concrete observation, theatrical enactments with diary-like recordings, personal fantasy with social issues. This is particularly evident in his most ambitious works, including Tod und Teufel (1973), The Silent Cry (1977), Outside In (1981), Face of Our Fear (1992), Trying to Kiss the Moon (1994) and Pain Is… (1997).”

Updates, 8/5: To catch up with a few remembrances, first, J. Hoberman for Artinfo: “The quintessential first-period Dwoskin film is a portrait of a solitary naked woman staring down the camera and otherwise reacting to her situation as the object of the viewer’s passive desire. Trixi (1969), a 30-minute distillation of an eight-hour shoot, in which the entranced rapport between subject and camera takes on the stylized sexuality of a tango, is the likely the film that prompted Warhol to pay Dwoskin the ultimate compliment: ‘How did you do it?’ Dwoskin, a co-founder of the London Filmmaker’s Cooperative and a teacher at the Royal College of Art, was an inspiration to both local filmmakers and film theorists—notably Laura Mulvey, whose canonical cinema-studies essay ‘Visual Pleasure and Narrative Cinema,’ drew in part on her discussions with Dwoskin.”

From Margalit Fox in the New York Times: “‘The themes of my work were born there [in the hospital] in some ways, because it’s really all about this world of relationships without much conversation,’ Mr. Dwoskin said in a 2009 interview on the British Web site Disability Arts Online. ‘Finding ways of communicating and to express the world from that position: that was my childhood.'”

LUX presents an interview with curator Rozemin Keshvani, “which took place at his home in November 2011,” and in which “Dwoskin relates the legendary start-up of the London Filmmakers Cooperative and the underground scene that emerged from Better Books.”

For news and tips throughout the day every day, follow @KeyframeDaily on Twitter and/or the RSS feed. Get Keyframe Daily in your inbox by signing in at fandor.com/daily.