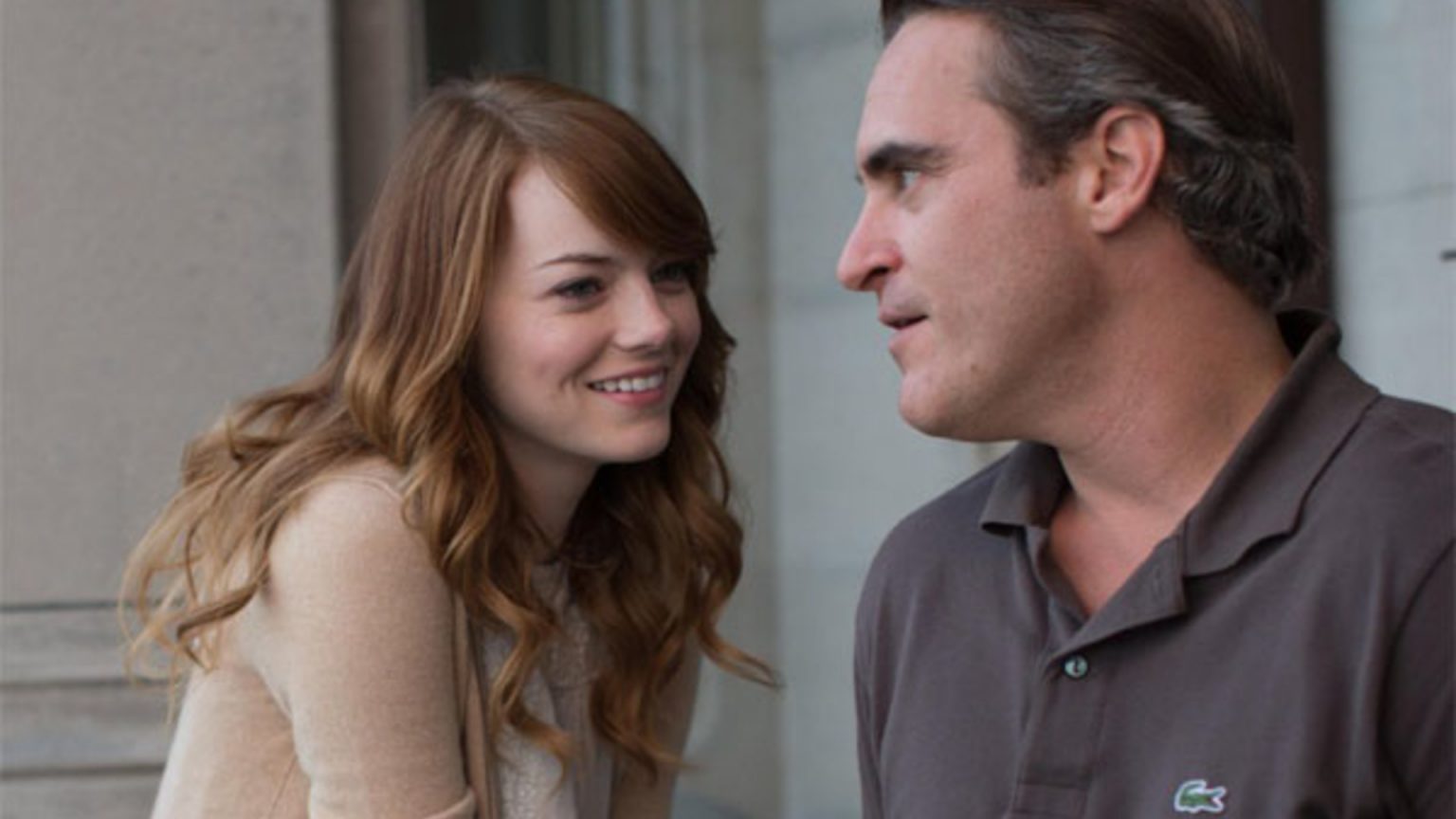 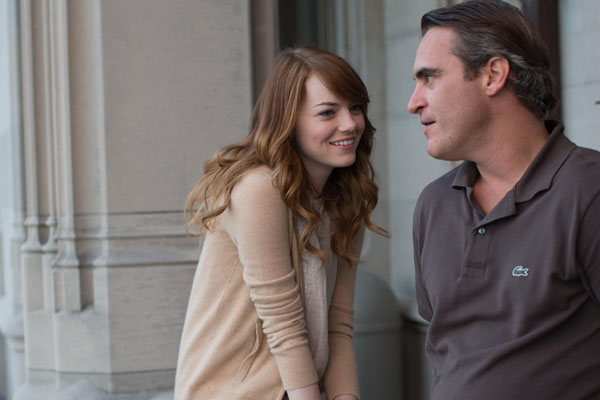 “After Alfred Hitchcock and his Gallic disciple, Claude Chabrol, has any filmmaker devoted more screen time to contemplating the mechanics of the ‘perfect’ murder than Woody Allen?” asks Variety‘s Scott Foundas. “Allen’s latest, Irrational Man, adds to a tally that also includes Crimes and Misdemeanors, Match Point and the little-seen Cassandra’s Dream—only, unlike those films’ homicidal protagonists, the philosophical anti-hero of Allen’s 45th feature kills not for love or money, but rather for a kind of existential clarity. That conceit puts a fresh spin on a familiar premise and marks Irrational Man as one of the Woodman’s more offbeat and ambitiously weird projects since the fragmented Deconstructing Harry in 1997, though less conventionally entertaining than recent home runs like Blue Jasmine and Midnight in Paris.”

Slapping Irrational Man with a D+ at the Playlist, Jessica Kiang calls it “an embarrassment.” It “neither thrills nor amuses and so generically ends up in the tragically overpopulated category marked ‘Woody Allen dramedy misfire’ instead. Because depressingly, this is a Woody Allen film and no mistake: the tepid murder plot, the college professor/student relationship, the constant references to Kant and Heidegger and Dostoevsky, the central character struggling to find meaning while women inexplicably fling themselves at him—these are all as familiar to us as the Windsor EF Elongated typeface he invariably sets his credits in. And what new there is in Irrational Man is nothing to brag about—there’s an atypical but disheartening slapdash quality to the filmmaking: dodgy edits, awkward staging, atrociously redundant, charmless voiceover.”

The Guardian‘s Peter Bradshaw agrees that what we have here is “another of the amiable but forgettable and underpowered jeux d’esprit that he produces with an almost somnambulist consistency and persistence. It’s a tongue-in-cheek mystery which is neither quite scary and serious enough to be suspenseful, nor witty or ironic enough to count as a comedy.”

“Woody Allen comes out with all guns blazing on his modestly appointed but fiercely intellectual thriller,” counters Graham Fuller in Screen. Joaquin Phoenix is Abe Lucas, “a listless new faculty member at leafy Braylin College in Rhode Island.” This “inert, depressive newcomer” becomes “a fantasy object for two sexy huntresses, [Parker] Posey’s Cougarish Rita Richards and [Emma] Stone’s Jill Pollard.” When Abe and Jill “eavesdrop on an anguished woman who wishes dead the supposedly-biased judge in her children’s custody case,” Abe “suddenly discovers his inner moral relativist, deciding to help the distraught mother and serve society by offing the judge, his lack of motive making it the perfect crime. His planning and perpetration of the murder rejuvenate him.”

“Irrational Man is buoyed by a stubborn sense of lightness that persists throughout the increasingly macabre narrative, the jazzy tone barely taking a breath during a sudden scene of violence towards the end of the film,” writes David Ehrlich at Little White Lies. It “can be one of Allen’s cleverest films, and it’s certainly among his most focused…, but even the satisfying tidiness of its ending contributes to the sense that we’re watching a simulation rather than a story.”

“After last year’s forgettable Magic in the Moonlight, the latest feature marks a small but welcome return to form,” finds Indiewire‘s Eric Kohn. Just two out of five stars, though, from John Bleasdale at CineVue.

Deadline‘s Mike Fleming Jr. has a good long with Allen about, among other things, creating a series for Amazon: “I have regretted every second since I said OK…. I’ve been struggling and struggling and struggling. I only hope that when I finally do it — I have until the end of 2016 — they’re not crushed with disappointment because they’re nice people and I don’t want to disappoint them. I am doing my best. I fit it in between films, so it’s not like, no film this year, I’m doing Amazon. It’s a job within my usual schedule. But I am not as good at it as I fantasized I might be.”

Updates: “Allen has worked wonders in the past with superficially similar moral tales,” grants the Telegraph‘s Tim Robey, “but this one’s a sketchy rehash. Key physical details of what are posited as perfect crimes—how lifts function, to pick one weird example—are glaringly untrue to life. As filmmaking, it has almost needlessly pretty Darius Khondji photography, but the rhythms feel limp and half-asleep. The main problem is the philosophical purchase Allen thinks his film is gaining: far from profundity of any sort, it ultimately peddles the thesis that killing people out of daft, misplaced idealism isn’t an especially wizard plan.”

“In all, it feels by-the-numbers, a fun but fairly forgettable minor work,” writes Barbara Scharres at RogerEbert.com.

For Time Out‘s Dave Calhoun, “there’s something sloppy and sluggish about Irrational Man, even by Allen’s patchy standards. It is by no means a disgraceful film. At times it feels respectable and uncomplicated, and there’s enough for Allen aficionados to enjoy and unpick. But the energy levels are low, not helped by the early stages of the film being anchored by Phoenix’s mumbling, laconic mess.”

“Stone is so good and charismatic that in one pivotal scene near the end of the film you begin to forget she’s acting opposite a much more celebrated peer,” writes Gregory Ellwood at HitFix. “In theory, she should be the next great Woody Allen muse, but he hasn’t given her the material yet to make it a truly memorable collaboration.”

Updates, 5/18: At the AV Club, Ignatiy Vishnevetsky gives Irrational Man a C+: “It has problems familiar from much of the director’s later output—namely, it feels like a first-draft script performed by an undirected cast—and suffers more than usual from Allen’s inability to write grown-up intellectual dialogue, but almost gets by on narrative misdirection and Phoenix’s off-beat performance.”

Buzzfeed‘s Alison Willmore points out that “a line in which Abe cites Simone de Beauvoir on men defining women only in relation to them is unfortunately resonant. Irrational Man has some great ingredients, with Phoenix infusing as much sincerity as possible into a character whose problems are entirely theoretical, Stone looking luminous in her crummy role, and cinematographer Darius Khondji making Newport glow like a vacation catalog. If only the movie justified their efforts in the least bit.”

“As much a trifle as last year’s Magic in ihe Moonlight,” writes Mike D’Angelo at the Dissolve, “it’s ideal turn-off-your-brain summer fare, in spite of all the Kant and Heidegger references. Nice try, Woody.”

For Adam Cook, writing for Movie Mezzanine, “this is actually one of Allen’s most twisted and enjoyable films from the past few years.”

“High wince factor or not, Irrational Man is never less than watchable,” finds Ben Kenigsberg at RogerEbert.com. “The bit involving a heavily notated copy of Crime and Punishment is either Allen’s lamest dramatic device or his best joke in years.”

“Of course, his detractors will complain he keeps making the same film,” writes Tim Grierson for Paste. “Yes, but it remains a good film—and one that continues to fascinate him, and us.”

Update, 5/19: “The notion of a dual voiceover—with Abe and Jill taking turns to chip in—is intriguing,” writes Alex Ramon at PopMatters, “and Allen used voiceover for some good, distancing effects in Vicky Cristina Barcelona (2008). Here, though, the device is disastrous. The characters keep telling us what we’ve already perceived, or else filling in details that haven’t been sufficiently dramatized.”

Update, 5/20: “The main problem is the philosophical purchase Allen thinks his film is gaining,” finds the Telegraph‘s Tim Robey: “far from profundity of any sort, it ultimately peddles the thesis that killing people out of daft, misplaced idealism isn’t an especially wizard plan.”

Cannes 2015 Index. For news and tips throughout the day every day, follow @KeyframeDaily. Get Keyframe Daily in your inbox by signing in at fandor.com/daily.