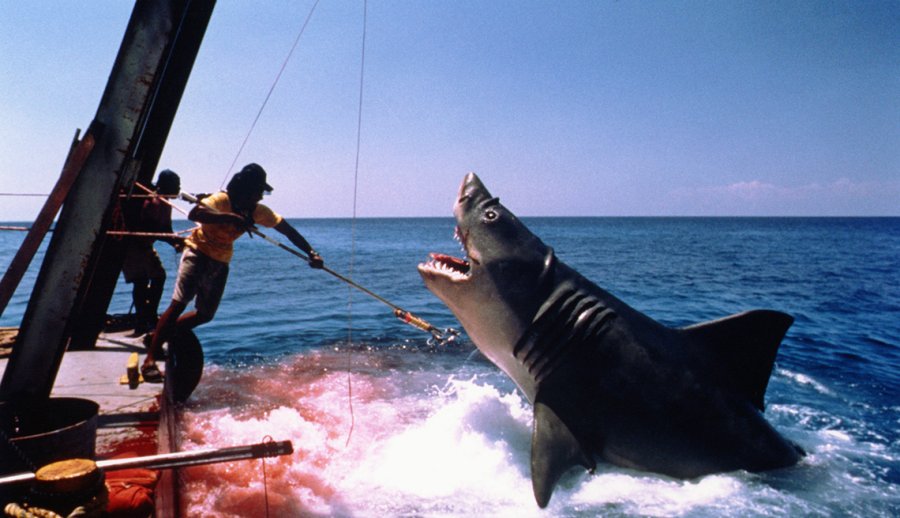 An Old School of Onscreen Sharks

How else, then, to explain the lack of serious shark movies before Jaws in 1975? Sure, there was Howard Hawks’ Tiger Shark in 1932, but that was an Edward G. Robinson vehicle about a fisherman tangled in a love triangle. Robinson then starred in a 1941 remake called Manpower, where his character is an electrical worker. That a sea story was remade as an electricity story probably says everything about how important sharks really were to Tiger Shark.

To be sure, there were sharks in old movies, but they weren’t featured that much, certainly not compared to the post-Jaws cash-in that has never let up, from Mako: The Jaws of Death (1976) to the deliberately cheesy Sharknado comedies that began in 2013. In 1977, for a noteworthy example, sharks were already so ubiquitous from Jaws that an infamous episode of Happy Days had the Fonz jumping over a shark, later inspiring the oft-repeated idiom “jumping the shark.” But in the old days, in an era of movie stars that was less focused on concepts, there were not so many sharks to be jumped. The most vividly realized onscreen Sharks before Jaws were the ones who fought the Jets in West Side Story. And perhaps the industry’s attitude toward sharks could be best summed up by Adam West punching a rubber shark while hanging upside down from a rope ladder in the 1966 Batman, complete with a sound effect that sounds an awful lot like someone was smacking up a gym mat.

But there were some interesting signposts along the way to Jaws, presented here in chronological order:

But despite its often lackluster use of sharks, old Hollywood did not have a blanket issue with sea monsters. There was a giant squid in Jules Verne’s Twenty Thousand Leagues Under the Sea with sharks in minor roles, and the film industry had adapted the Verne novel back to cinema pioneer Georges Méliès. The squid motif would continue on, with the atmospheric squid attack in Cecil B. DeMille’s Reap the Wild Wind (1942). The Spielberg of his day, DeMille could have included any sea creature he wanted, but was clearly okay with the Verne precedent. Then in 1948 there was Wake of the Red Witch, with a second John-Wayne-vs-cephalopod smackdown, the Duke this time battling an octopus.

So, beyond the Verne influence, what did old Hollywood have against featuring sharks?

It may have been the same thing that it had against laser guns and rocket ships. After all, movie serials about Flash Gordon and Buck Rogers were made, but the industry did not spend big budgets on them until they morphed into Star Wars, and the parallels with Jaws are clear. The blockbuster era that began with Spielberg and Lucas was a case of doing a very good job on material that was treated as disposable in years before. But if sharks were kid stuff and over the top, there may have been another element at work too. Sharks were maybe just a little too gory and nasty for the old days. The giant squid is a more genteel sea monster, without an obvious mouthful of vicious saw teeth. Whatever it does to its victims, those arms are going to obscure it in a manner in line with the less graphic ways of the Hays Code.

Yet sharks did sneak into the classic Hollywood mainstream a little more deeply than the snub would suggest, which may be why it took a filmmaking genius to do it. When Orson Welles made The Lady from Shanghai (1947), his directing career was already on the skids from the fallout over Citizen Kane. Given a chance by Columbia’s Harry Cohn, Welles scripted, directed and starred in a fascinatingly odd crime film, full of unique moments. But what must strike many viewers today is the scene where Welles essays a haunting memory of watching sharks tear each other to shreds in the sea. Jaws, of course, features Robert Shaw’s justly famous Indianapolis speech, but Welles put a premonition of it on film decades before that stands on its own merits.

So, while enjoying the shark repellent antics of Adam West, do remember Orson Welles as a proto-Robert Shaw. The serious shark movie was always there in Hollywood, but latent, lying in wait and biding its time, just like a sea monster.